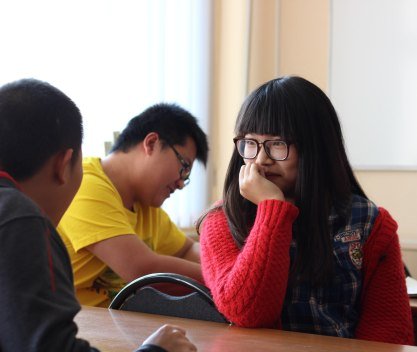 The SUSU Pushkin Institute Research, Education and Coordination Centre summarized results of events held for university and school students from the People’s Republic of China.

October through December of 2018, the Pushkin Institute Centre implemented a number of projects targeted at popularisation of Russian language and culture abroad. Students were offered to take part in four events: a Contest on Russian Calligraphy, International Online Olympiad in Russian as a Foreign Language, a contest of projects entitled “Russian Language as a Mirror of Digital Transformations”, and a photo contest entitled “Russia and China: Country – Language – Culture”. These events had been developed by specialists from the Pushkin Institute Centre together with the Department of Russian as a Foreign Language of the Institute of Linguistics and International Communications.

International Online Olympiad in Russian as a Foreign Language had become the most popular project among students: 362 people took part in it. The event was organised in order to boost interest to a more profound study of Russian language and culture and popularise education in Russia among residents of China.

The Olympiad was held in two rounds. The first, elimination, round was targeted at testing basic knowledge of Russian language. Assignments of the second round were divided into two directions. The first one tested the knowledge of history of Russian language and culture, 1st prize was awarded to student Cen Hongyue, 2nd prize – to Li Xiaopei, and the 3rd prize was awarded to Hu Mingxun. The second direction was related to the specificity of Russian language application in the sphere of digital technologies. Zhang Yuhan was placed the first, Zheng Chunling was the 2nd and Fang Er’ya was the 3rd.

“It is often that Russian language for foreign citizens is a means for getting a degree in our country. Presently, South Ural State University is developing within the digital industry concept; therefore, a decision was made to not just make this Olympiad direction to be engineering or technology-related but try to present Russian language in the sphere of digital technologies,” said the event organisation authority, Associate Professor at the SUSU ILIC Department of Russian as a Foreign Language, Olesya Sharafutdinova.

International contest of projects entitled “Russian Language as a Mirror of Digital Transformations” reflects one of the most important strategies of South Ural State University’s development: advancing along the way of digital transformations. Students had to create an information graphics dedicated to the use of special terminology in the sphere of contemporary digital technologies. They needed to pick a term in Russian, translate it into Chinese and provide a definition, as well as make examples of using the term in Russian. First prize was awarded to two students – Xu Bingtao and Tian Ziqiang; Zhang Simeng was placed the 2nd and Wang Yuying was placed the 3rd.

The Contest on Russian Calligraphy was held at Pushkin Institute Centres of Chinese universities – members of the partnership network. Assignments were compiled by Associate Professor at the Department of Russian as a Foreign Language, Yulia Kazakova, considering the specificity of teaching native Chinese speakers. The winners were determined in each Centre.

The international photo contest entitled “Russia and China: Country – Culture – Language” was held in order to display specificities of Russian language and culture and their interrelation with the language and culture of China in the most comprehensible form. The plot for pictures had been chosen by each participant individually; based on the topic and the goal of the contest, 1st prize was awarded to Ye Qian; Li Guijiang was placed the 2nd, and Liang Xiaoyue was placed the 3rd.

It should be noted that contests and Olympiads for students are held in accordance with the Plan of events for support of Russian language and education in Russian, for implementation of which South Ural State University got a subsidy in 2018. The work is being carried out within the project entitled “ Establishment and Development of a Network (not less than 8) of Pushkin Institute Centres in the PRC on the basis of Institutions Providing Education in Russian Language”.