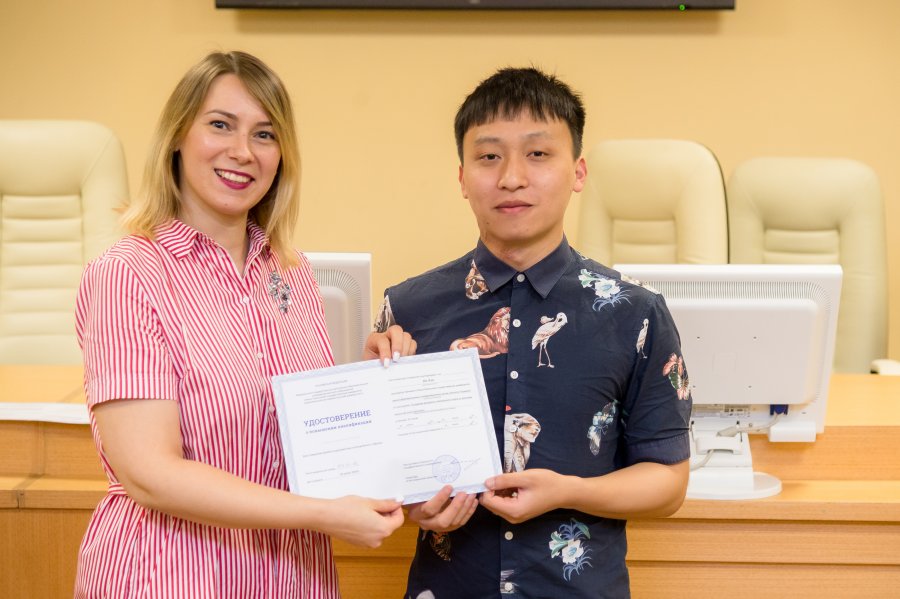 South Ural State University has awarded certificates on the completion of the advanced training course on the “Creation of an Original Electronic Course on Russian as a Foreign Language”. This is a joint development of two SUSU’s subdivisions: the Institute of Linguistics and International Communications and the Institute of Open and Distance Education.

This advanced training course is part of the project on creation of the SUSU’s Pushkin Institute Centres within the frameworks of the grant by the Russian Federation Ministry of Education. It is intended for the practicing teachers from China wishing to use modern methods of teaching Russian as a foreign language, and it was being held remotely during six weeks (48 hours).

This course was created because blended education is currently becoming more and more popular across the world; and it implies full-time studies and distance learning for students. This trend is relevant in the field of Russian as a foreign language – the academic staff of the Department of Russian as a Foreign Language not are only giving lectures, but are also developing parts of their electronic course, which their students can use for distance learning. This programme is unique because it allows to study the specifics of using electronic resources namely in teaching Russian as a foreign language.

“The creation of an electronic course in the field of Russian as a Foreign Language sometimes causes difficulties among teachers because this a special type of activity, which requires new competences. Taking this need into account, including among our Chinese partners, we have developed such a course jointly with the team from the Institute of Open and Distance Education. It was a really interesting work for us, and these are our first graduates. They tested this course and gave their assessment, and we made conclusions on how to improve the course and develop this field of activity in general,” noted teacher of the course, Associate Professor of the Department of Russian as a Foreign Language Elena Doronina.

In the first part of the course the attendees were studying the method of teaching Russian as a foreign language with the use of modern technologies. The second part of the programme, which was developed with the guidance by Deputy Director of the Institute of Open and Distance Education Olga Elagina, was intended for mastering the technology of creating of an electronic course. The students learned what the structure of such course should be like, as well as developed a fragment of their own electronic course.

The representatives of the Department of Russian as a Foreign Language awarded the attendees from China their certificates on advanced training, which will allow them to efficiently use electronic technologies for teaching students in the future. According to the course’s attendees, the classes also allowed to improve their mastery of the Russian language.

“For me, a big issue is the mastery of the Russian language, and I was hoping to improve my skills with the help of this course. Within this programme I was watching training videos in the Internet, answering questions, and much more. The video classes provided information on how to study Russian language. I specifically remember a video on Russian Grammar, for instance on using perfective and imperfective verbs. Before I came across difficulties with the verbs of movement because the Chinese verbs are not so diverse. The teachers have provided me with big amounts of helpful information,” shared his impressions from taking the course a student from the Institute of Linguistics and International Communications Yang Jin.

The organizers of the project are also confident that this course will be offered next academic year as well.